The Fall Forum will be on Saturday, December 5th, 10:00 AM-12:00 PM via Zoom. Register here: https://zoom.us/meeting/register/tJwlfuCtqDMsHtZlt–AWjrUC-r-amRnkVcp  Sign in begins at 10:00 AM and the meeting will start precisely at 10:15 AM. Please invite guests. There is no charge for this event.

Our speaker: Dr. Carolyn Jefferson-Jenkins “To Finish the Fight”: NOW? 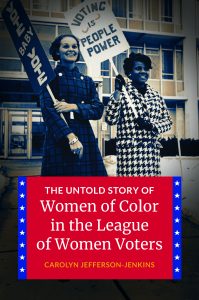 Six months before the ratification of the Nineteenth Amendment, The National American Woman’s Suffrage Association (NAWSA) transitioned into the League of Women Voters to, as League founder Carrie Chapman Catt said, “Finish the fight”. In 1920 the ratification of the Nineteenth Amendment did not guarantee the right to vote for ALL women. Most women of color could not vote without restriction until the passage of the Voting Rights Act of 1965.

2020 has become a year of reckoning, not just with our history, but with the systemic racial and social injustice, gender inequity, election integrity and other challenges of the milestones and anniversaries we commemorate.

What do we do with the lessons learned from the universal themes of resistance, resilience and renewal? Is it time now to “finish the fight? Or will the “fight” ever be finished? It’s time to decide how we move forward.

You can find Carolyn’s book, The Untold Story of Women of Color in the League of Women Voters, at the publisher’s website: https://products.abc-clio.com/abc-cliocorporate/product.aspx?pc=A6243C It is also available at Amazon and Barnes & Noble.

As a two-term president, Dr. Jefferson-Jenkins led the education and advocacy work of this grassroots organization on a wide range of public policy issues.  During her years of service at the national level, Dr. Jefferson-Jenkins oversaw several comprehensive League initiatives.  These included the 1996 Get Out the Vote campaign, which registered more than 50,000 voters nationally; the Wired for Democracy project, which increased voter education and participation via the Web; and the League’s strategic plan, “The Future Plan” which emphasized keeping the League relevant through diversity, equity and inclusion.

Throughout her presidency, Dr. Jefferson-Jenkins placed a high priority on campaign finance reform, election reform, education reform and health care, particularly for underrepresented populations. Much of her tenure focused on the League’s initiative “Vision for the 21st Century,” which emphasized League impact, visibility, and organizational development.  She encouraged enhanced communications, as reflected in the new League website established in 2000 and the redesigned quarterly magazine, The National Voter. Forward-thinking outreach under her leadership was exemplified by the Take a Friend to Vote campaign and Democracy Net (DNet), a nonpartisan voter information website. Through these efforts Dr. Jefferson-Jenkins worked to increase participation in the electoral process and encourage women and ethnic minorities to run for public office.

A recipient of numerous awards for her volunteerism and civic involvement, on March 12, 2020, Dr. Jefferson-Jenkins received the Miami University Freedom Summer of ’64 Award which recognizes the spirit of the 800 students who gathered on the campus of Western College for Women to change the country during Freedom Summer in Mississippi. Dr. Jefferson-Jenkins has been recognized in Notable Black American Women, Volume III; Who’s Who Among Successful African-Americans; and Who’s Who in American Education. She has been the recipient of the Women of Distinction Award from the Girl Scouts of Colorado, the Distinguished Alumni Award in Civic Leadership from Cleveland State University, the Making a Difference Award from John Carroll University, and the National Coalition of Black Civic Achievement Civic Leadership Award. She recently received the 2020 Trailblazer Award from the League of Women Voters of Ohio.